Sergey Kurdyashov and  Josh Brown of Softorino talk about the development of WALTR, a simple but powerful utility to load a wide variety of audio and video formats on your iPhone and iPad quickly and without transcoding. The difference is that those files then appear in the native music and video apps, exactly as if they were natively supported. MKV, AVI, FLAC and all those other hard-to-deal with formats load and play easily. Sergey and Josh reveal the origin of the name, discuss how they discovered 4K video could be played on the newest iPhones, and why their intro video is a template for other developers to follow.

This edition of MacVoices is sponsored by Smile, the makers of  PDFpen 7  and PDFpenPro 7, PDFpen for iPad,  PDFpen for iPhone,  PDFpen Scan+,  as well as TextExpander for Mac, TextExpander touch  and DiscLabel. Great software to help you get more done.

Josh Brown is a proud Chicagoan. Extremely passionate about being involved in applications that improve the experience between OS X & iOS. In other words, put â€˜Better’ into ‘Better Together’. Josh is the copywriter, marketing guy & â€˜Don Draper’ at Softorino. He is also the face of WALTR, being the guy behind the how-to videos & on-boarding videos inside the app.

Sergey Kurdyashov is the â€˜Heisenberg’ at Softorino. His role is simple â€“ CEO. From Parallels UX Designer to iOS Hacker, Sergey is the person behind WALTR’s UX and according to the press, the latest Mac OS X app, WALTR, is a true app gem in the Apple eco system. 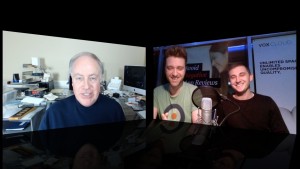