On The Road to Macworld 2010, The Digital Guy, Bruce Nazarian, talks about how Blu-ray disc authoring has improved over the last few years, and why you’ll be a Blu-ray Jedi after his limited-seating session at Macworld. Bruce talks about how you can experiment with Blu-ray authoring using your current DVD drive and players. Bruce’s background is in music production, both analog and digital, and he’ll be sharing some of his wisdom at another Macworld session focusing on Logic 9. Find out what to expect, and why you need to sign up *now* for these sessions, the extra value Bruce and Macworld are offering to attendees of the Blu-ray session and more. 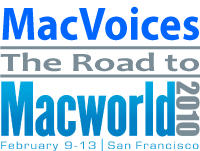 The Road to Macworld 2010 is a special MacVoices series produced in partnership with Macworld to preview some of the exhibitors and presentations at Macworld 2010 in San Francisco from February 9 – 13 at the Moscone Convention Center.