Another lost conversation from NAB, this time with Sean Mullen and Stefanie Mullen  of  Rampant Design. They talk about their new line of Rampant Final Cut X plug-ins that deliver their signature style effects in a plug-in architecture, providing more control for the editor. They have also launched Rampant Live, a call-in  Internet show that focus on the stories of those in the video production world.

This edition of MacVoices is supported by Macstock Conference & Expo and the Midwest Mac BBQ, coming to Woodstock IL on July 16 and 17.

With over 60 credits in feature film and television,  Sean Mullen  – founder of  Rampant Design Tools  – has shot and created VFX elements for network shows, feature films, private hollywood libraries and has created content for many of the major stock companies. His work has touched such acclaimed Hollywood and television productions as Charmed, Ally McBeal, NCIS, Felicity, Nip/Tuck, Idle Hands, Lake Placid and Any Given Sunday. Sean was inspired by his editor friends to create the first Rampant Design Tools – elements for his friends to mix and match and drop on their timelines that would instantly add a unique look / flavor to their videos. This inspiration essentially gave birth to many of the product lines you see at Rampant today. Find both  Sean Mullen  himself and  Rampant Design Tools  on Twitter. 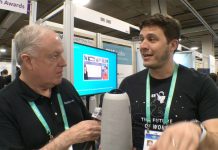