The MacJury takes on the issue of royalty payments for the first three, free, months of the soon-to-be-launched Apple Music service. Who were they negotiating with? Were they negotiating with the right people? Does Taylor Swift really speak for the artists, for the labels, or just for herself? Was their a bad guy in the story, or was it all just a big PR stunt? The panel of  Julio Ojeda-Zapata, Neal Pann, Guy Serle and host Chuck Joiner discuss it from every angle, to give you a different perspective on these events.

Julio Ojeda-Zapata  has been on the front lines of the Internet and technology revolutions as a columnist, editor and award-winning reporter for more than a decade. He covers  consumer tech forTwinCities.com, a MediaNews Group and Digital First Media property, and its St. Paul Pioneer Press dead-tree counterpart. Julio  reports on a wide range of tech topics, post daily to his  Your Tech Weblog, and slap together tech videos from time to time (when I’m not in one). He is  the author of  iPad Means Business

Neal Pann  is an architect and sole proprietor of  Neal A. Pann, Architect . He’s the creator and co-host of the  Archispeak  Podcast , which is casual conversation about all things architecture, both the good and the bad. He also founded the  Apple for Architects  site, which is dedicated to helping architects with their Apple products. You can follow him on  Twitter.

Guy Serle, best known for being one of the co-hosts of the MyMac Podcast, sincerely apologizes for anything he has done or caused to have happened while in possession of dangerous podcasting equipment. He should know better but being a blonde from Florida means he’s probably incapable of understanding the damage he has wrought. Guy is also the author of the novel, The Maltese Cube. You can follow his exploits on Twitter. 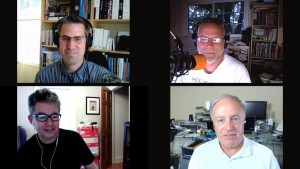