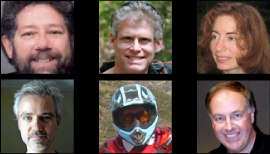 The details of Apple’s newest iPad and Apple TV are now official, so we empaneled a MacJury from the TidBITS staff to help us review the announcements and what they mean. The furor over the lack of a name, the impact of the retina display, how people will use the improved camera are all part of the deliberations, as the group debates the most important features. The new iPhoto for iPad, the increased resolution of the Apple TV, whether you can really get work done on an iPad and all sorts of related topics were debated by the panel of Michael E. Cohen, Adam C. Engst, Tonya Engst, Joe Kissell, Matt Neuburg and host Chuck Joiner.

Michael E. Cohen has worked as a teacher, a programmer, a Web designer, a multimedia producer, and a certified usability analyst. He’s the author or co-author of several books, including The iPad Project Book, Apple Training Series: iLife (iLife ’09 Edition), Take Control of Syncing Data in Snow Leopard, and Take Control of PDFpen 5.

Joe Kissell is the author of over two dozen Take Control ebooks, as well as a host of print books. He is a senior editor for TidBITS, and a Senior Contributor to Macworld. Keep up with him if you can on his personal blog, JoeKissell.com, and on Twitter.

TidBITS Contributing Editor Matt Neuburg has been writing for the publication since 1991, concentrating on issues surrounding word processing, databases and text organization programs, scripting and innovative programming systems, and a variety of utilities. He has written some popular freeware programs, such as MemoryStick and NotLight. He has created the online documentation for a number of applications, such as Script Debugger and Opal. He has written books about programming Frontier, REALbasic, and AppleScript, and is the author of various Take Control ebooks.

Wear your iPad as a wristwatch? Really? by Amanda Kooser on CNET