Christopher Breen discusses the changes he’s making in his life, which include leaving Macworld behind and taking a position at an â€œunidentified tech company headquartered in Cupertino.â€ Chris talks about what this will and won’t mean to his social media presences, how the changes in publishing influenced his decision, and shares some perspective on his time as a very public Mac figure.

Christopher Breen  has been writing about Apple and its technology since the latter days of the Reagan administration for such publication as MacUser, MacWEEK, and  Macworld  Until recently, he was a Macworld senior editor and host of the  Macworld Podcast, is author of  The iPhone Pocket Guide, Sixth Edition (6th Edition)

(Peachpit Press), and offers  lynda.com software tutorials  on such subjects as OS X Lion, the iPad, and screen casting. He is a professional musician in the San Francisco Bay Area, and is headed for a new career with an unidentified tech company headquartered in Cupertino. 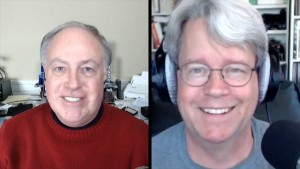