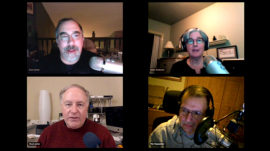 It was so much fun the first time, we decided to do it again. A second MacJury panel takes on the question of holiday gifts and delivers yet another eclectic and intriguing set of picks that include both tech and non-tech options. It isn’t too late to get some great gift picks from the panel of Karen Anderson, Steve Sande, Tim Verpoorten and host Chuck Joiner.

This edition of MacVoicesTV is sponsored by CrashPlan: Automatic, offsite, data backup. You’re data’s protected and accessible by you â€“ anytime, anywhere.

Karen Anderson is a Seattle-based writer and web content professional who brings common sense to social media. She develops online marketing communications materials for clients in the business, government, and nonprofit sectors. She conducts social media audits, leads web content seminars, and speaks at technology industry gatherings including Ignite Seattle and Macworld/iWorld. Karen worked as a writer and managing editor at Apple for six years, and after leaving Apple wrote the ebook Take Control of iPhone Basics. She blogs at WriterWay.com, SocialBusinessMaven.com, FitnessFoodandFashion.com, and iPhone4Tips.com.

Steve Sande also writes way too much. He’s the Hardware Editor at TUAW, and recently logged over one million words written for the blog in just over three years. He’s written a number of books for Take Control Books and Apress, is married to a rocket scientist, and spends his days being bossed by a cat. You can watch what he says on Twitter, and see him every Wednesday on TUAW TV Live.

Tim Verpoorten has been a Mac Blogger for about 10 years. His blog, Surfbits.com, looks at Hardware, Software and Web sites that make using the Mac special. In 2005 he started the MacReviewCast Podcast and over the next 6 years Tim and group of talented podcasters and friends reviewed Mac software and gear. The MacReviewCast was best known for Tim’s look at the Mac Freeware of the week. You can still find him occasionally on the MacRoundtable and on his SurfBits blog.

Membership in a Mac User Group – Find one near you

Sensu Brush and Stylus for iPad

Take Control of Your Paperless Office by Joe Kissell