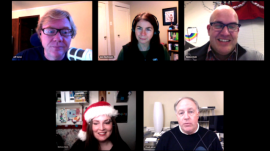 With the holiday season in full swing, The MacJury takes a break from the serious topics to deliver a truly eclectic set of suggestions for those on your gift list. Whether a serious geek or with no tech interest at all, your gift-giving problems are solved by the panel of Melissa Davis, Weldon Dodd, Jeff Gamet, Jean MacDonald and host Chuck Joiner.

Melissa Davis is a mother of two children and TheMacMommy to many and their Apple gadgets with her personal information technology consulting business. She lives in Tucson, AZ where she synchronizes with her science teacher husband and their two young fanboys. She enjoys social networking and helping people all over the globe and in her own back yard get more joy from their Apple hardware and software. Her website is The MacMommy. You can connect with her on Twitter and on Google+.