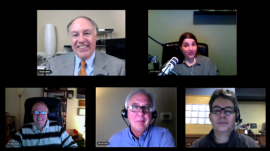 After spending a weekend using and experimenting with the iPad mini, members of The MacJury gathered to discuss the size, screen, and camera of Apple’s newest tablet. Is the iPad mini just another tablet, or does it represent the future of the iPad line? Where does it shine, and where does it fall down? Is it a device for consumption or productivity? All of this and much more is examined by the panel of Katie Floyd, John Martellaro, Derrick Story, Julio Ojeda-Zapata and host Chuck Joiner.

The audio-only version of this episode is available on MacVoices.

Katie Floyd is a litigation attorney and the co-creator and host of the acclaimed Mac Power Users Podcast distributed through the 5by5 Network. Mac Power Users teaches listeners how to get the most from their Apple technology with focused topics and workflow guests. The show was ranked the number two technology podcast in iTunes and routinely featured featured by Apple. Katie is a regular speaker at Macworld Expo, a member of the influential Mac Roundtable Podcast featuring a panel of Mac luminaries and frequent speaker and consultant on all things Apple and technology related. Katie serves as the President of her local Macintosh Users Group.

John Martellaro is the Senior Editor for Reviews and Analysis at The Mac Observer. Previously,he has worked for NASA, Lockheed Martin Astronautics,the Oak Ridge National Laboratory and Apple. At Apple, he worked as a Senior Marketing Manager, a Federal Account Executive and a High Performance Computing manager. His interests include all things Apple, chess, science fiction and astronomy.You can follow John on Twitter

Derrick Story is a professional photographer, writer, teacher, and photography evangelist for Lowepro.He’s authored several digital media books, including The Digital Photography Companion (O’Reilly Media, publisher). Derrick is a Senior Contributor for Macworld magazine where he writes a digital photography column, and he’s a regular presenter on the popular training site, lynda.com featuring titles on Aperture, iPhoto, Flickr, and photo technique. Derrick has formed a virtual camera club called The Digital Story that’s open to all photography enthusiasts.The site features weekly podcasts, daily posts, training videos, and reader-submitted photos. You can also join Derrick on Facebook where he features a “Member Photo of the Day” and provides weekly photography tips.

Julio Ojeda-Zapata has been on the front lines of the Internet and technology revolutions as a columnist, editor and award-winning reporter for more than a decade. He covers consumer tech for TwinCities.com, a MediaNews Group and Digital First Media property, and its St. Paul Pioneer Press dead-tree counterpart. Julio reports on a wide range of tech topics, post daily to his Your Tech Weblog, and slap together tech videos from time to time (when I’m not in one). He is the author of iPad Means Business

The Jack by Insanely Great Products