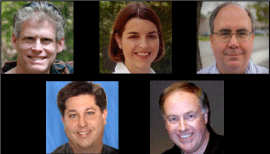 After spending a couple days with the bright, shiny new iPhone 5, members of The MacJury convened to share and compare experiences with each other and you. Discussing the new size and form factor, the new Lightning connector, the new EarPod headphones, the speed of the processor and how it affects real-world use, battery life, the new camera and panorama capability, and a whole lot more are the panel of Adam Engst, Katie Floyd, Mark Fuccio, Chuck La Tournous and host Chuck Joiner.

Katie Floyd is a litigation attorney and the co-creator and host of the acclaimed Mac Power Users Podcast distributed through the 5by5 Network. Mac Power Users teaches listeners how to get the most from their Apple technology with focused topics and workflow guests. The show was ranked the number two technology podcast in iTunes and routinely featured featured by Apple. Katie is a regular speaker at Macworld Expo, a member of the influential Mac Roundtable Podcast featuring a panel of Mac luminaries and frequent speaker and consultant on all things Apple and technology related. Katie serves as the President of her local Macintosh Users Group.