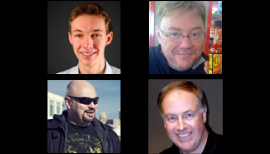 When the first MacJury for 2012 convened, they discovered no one had purchased tech gifts for them, but they had all bought goodies for themselves. The panel discusses their choices, some of which may surprise you, debate the pros and cons of the MacBook Pro laptops vs. the MacBook Air line, replacement applications for the latter, a utility that is needed from Apple and more. Those sharing their wisdom include Erik Bernskiold, Jeff Gamet, Steve Stanger and host Chuck Joiner.

Erik Bernskiold is a web designer and technology geek who spends his days building websites for clients at XLD Studios as well as trains people in software and design at Bernskiold Media .

Steve Stanger is a self-described Podcaster, photographer, I.T. guy, tech enthusiast, music dabbler, gamer, avid sci-fi reader and Apple geek. You can find out more about him at his profile page, or follow him on Twitter, and hear him on The Mac Attack and iSee iShoot iPhone.

Mac Pro SSD and Hard Drive Combo: How and Why by Ted Landau on The Mac Observer