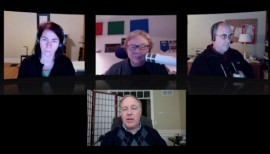 Now that the dust has settled from Macworld | iWorld 2012, The MacJury convened to discuss the successful and not-so-successful exhibitor presences at the show, to give exhibitors at future trade shows some examples of what to do and not to do. From pre-show communications to booth design to business card design, perspective is provided, recommendations offered, and judgement rendered by the panel of Jean Macdonald, Jeff Gamet, Mark Fuccio and host Chuck Joiner.