MacVoices’ visit with Adam Engst and the Virginia Macintosh Users’ Group wraps up with discussions of Apple and Tesla, CarPlay, set-top boxes and Apple TV, Adam’s upcoming iMac upgrade project, the benefits of SSDs, the future of iCloud, AirPods vs. AirPods Pro, Time Machine, and more. (Part 2 of 2) 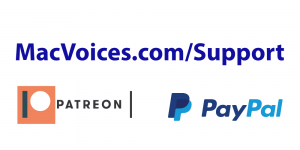 This edition of MacVoices is supported by you, our viewers and listeners. Find out about all the ways you can support the show, including our Patreon and PayPal options, at MacVoices.com/Support.

Adam C. Engst is the publisher of TidBITS and the TidBITS Content Network. He has written numerous books, including the best-selling Internet Starter Kit series, and many magazine articles – thanks to Contributing Editor positions at MacUser, MacWEEK, and now Macworld. His innovations include the creation of the first advertising program to support an Internet publication in 1992, the first flat-rate accounts for graphical Internet access in 1993, and the Take Control electronic book series. His awards include the MDJ Power 25 ranking as the most influential person in the Macintosh industry outside of Apple every year since 2000, inclusion on the MacTech 25 list of influential people in the Macintosh technical community, and being named one of MacDirectory’s top ten visionaries. And yes, he has been turned into an action figure. Want more? Follow Adam on Twitter for 140-character musings on a variety of topics.