At AltConf in San Jose, Dan Hixon of Sky Tripping explains how their app provides visual entertainment that not only looks good, but is good for you. Citing research that indicates being in nature, or at least seeing visuals of nature, can improve your state of being, he outlines how their drone footage of scenic settings is delivered via Apple TV or iOS device, and can help you de-stress. (And who doesn’t need to de-stress?) 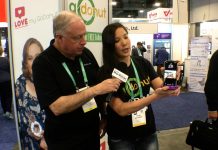