Mark Fuccio likes to dig into the facts behind the tech headlines, and joins us for our first Facebook Live show. Mark reveals his thoughts about the sales of iPhone iPhone X, what Spotify’s financials say about the long-term viability of the music streaming service, and why Apple Music is in a better position to be a long-term player. He also turns his attention to Dropbox, and what the changes they have made in their focus mean to the company.

This edition of MacVoices is supported by our new Patreon campaign. If you find value in MacVoices, please consider helping sponsor the show, and our ongoing efforts to bring you quality information.

MacVoices #20108: Shelly Brisbin Discusses The Latest in Accessibility and Her Book, iOS Access for All (1) 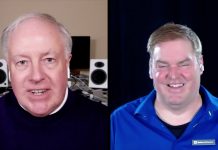