Jim Tierney, Chief Anarchist at Digital Anarchy, talks about their new video production plug-in Samurai Sharpen. Making it easier to sharpen just what you want, Samurai Sharpen lets you isolate just the parts that need work, leaving the others untouched. Jim talks about how it works and  profiles the other Digital Anarchy products, including one of their more unusual free plug-ins.

Jim Tierney is a pioneer in the development of plugins for motion graphics, animation and video editing. During the 1990’s, Jim worked for software companies like MetaTools, Atomic Power and Cycore. He helped create graphics products like Bryce, Evolution and Final Effects. After working on After Effects plugins for six years, Jim thought it was finally time to get out there and do some of his own. So he did, and Digital Anarchy was born in 2001. Connect with them on Facebook and Twitter, and follow Jim himself on Twitter.

MacVoices #20060: CES – Nextbase Has A Dash Cam For Everyone 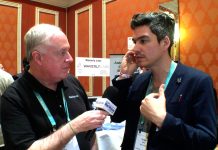