Coming off two wildly successful events,  Barry Fulk, the host of the  Midwest Mac BBQ, and  Mike Potter, the organizer behind the  MacStock Conference & Expo, talk about what worked and why it worked so well at both events, the importance of getting together in person in a world saturated with social media, and why the Apple community is unlike any other.

Take Control Books. Get the answers you need now from leading experts.

Chuck Joiner  is the producer and host of  MacVoices. You can catch up with what he’s doing on  Twitter,  Facebook,  Google+,  App.net  and  LinkedIn.

Michael Potter  is the Executive Producer of  For Mac Eyes Only. Mike’s love-affair for all things Apple began in his Junior High’s Library playing Lemonade Stand on a pair of brand new Apple ][+ computers. His penchant for Apple gear continued to be nurtured by the public school system when, in High School, he was hired as a lab supervisor to help run the Apple ][e lab for his fellow students and their Print Shop needs. Then, further still, in college he often opted to help a friend with her Computer Graphics coursework instead of focusing on his own studies â€¦ but only because it helped get him closer to the Mac-lab.

The first Macintosh that Mike could truly call his own, was a sad little Mac Plus he picked up from a garage sale for $20 with the intention of turning it into a Macquarium. When he flipped the switch and found it still happily booted, he didn’t have the heart to gut it and, instead, nursed the little guy back to health by installing a new hard drive and upgraded SuperDrive. A similarly rescued Macintosh SE/30 soon followed.

In the time since his weekly Mac podcast was first unleashed to a wary public in the Fall of 2006, over 290 episodes of For Mac Eyes Only, and more than 135 Quick Tips and other Special Segments have been produced to date. In 2013, For Mac Eyes Only launched a new Members Only portion of the site called FMEO Plus featuring exclusive video, audio, and more.

Through it all, Mike’s favorite part of producing the show continues to be the opportunity to make new friends within the ever-growing community of Apple fanatics.

Barry Fulk  is the  Producer, Co-host & Roving Reporter at    For Mac Eyes Only.  Guy, husband, one kidlette, loves tech, travel, and photography (including in/outside of Apple stores). Tends to be CDO (which is OCD alphabetized). 1/2 Japanese, 1/2 mutt. Currently drinking as much Kool-Aid as possible. 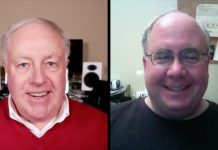