Steve Sande,  Kelly Hodgkins and  Dave Caolo have founded  Apple World Today, a site that brings the best of the old The  Unofficial Apple Weblog  over to a new site with new features and focus. The trio discuss what was involved in getting the site up so quickly, the long list of things necessary for a modern web presence, and some of the tools they are relying on. News, product reviews, opinions and, eventually, a community are all part of the mix of this promising new presence on the Apple web.

This edition of MacVoices is sponsored by  Lynda.com. With an unparalleled library of video training on design, web, photography, business, video and much more, Lynda.com can help you learn and improve your personal and business skills. For a free 10-day trial, visit  lynda.com/macvoices.

Dave Caolo  began writing online in 2000. Since then he’s contributed to Parenting Magazine, Unclutterer.com, The Unofficial Apple Weblog (where he served as managing editor for six years) and Apple World Today. When not writing, Dave co-hosts the Home Work podcast on the 5by5 network. He is a die-hard Red Sox fan who lives on Cape Cod, Mass with his wife, his two kids and their dog, Batgirl.”

Kelly Hodgkins is currently a  Contributor at Apple World Today and iPhone Hacks. Before writing, she spent a few years working with and teaching others how to use Adobe Flash and Macromedia Director. Even earlier than that, Kelly spent six years working on her Ph.D in Microbiology. Science and technology, She is a self-confessed Dead Head who can be found on Twitter.

Steve Sande  writes way too much. He served as the Hardware Editor at  TUAW, and recently logged over one million words written for the blog in just over three years. He’s written a number of books for  Take Control Books  and  Apress, is married to a rocket scientist, and spends his days being bossed by a cat. Now, he’s one of the founders of Apple World Today. You can watch what he says on  Twitter, and see him every Wednesday on  TUAW TV Live. 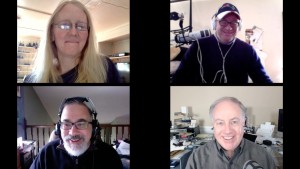