At  Macworld/iWorld 2014 in San Francisco, Logbar CEO Takuro Yoshida demonstrates Ring,their wearable tech solution for drawing characters in the air and having them appear on your iPad, a la ‘Minority Report’. Find their fully funded (by multiples) project on Kickstarter. 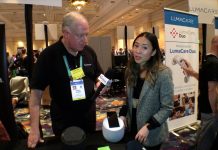