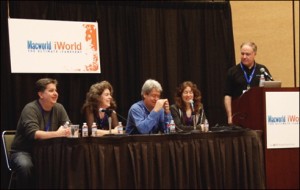 At Macworld | iWorld 2012, a distinguished panel of tech-oriented parents host Chuck Joiner to discuss the challenges of parenting brought on by the ever-changing world of technology. Not long ago, the problem was addressed by limiting time on the family computer. With the arrival of the iDevices, and access to the web in the palm of your child’s hand, the game has changed. Get some tips and tricks from the folks who deal with tech for a living, Macworld Senior Editor Christopher Breen, Tonya Engst of TidBITS and Take Control Books, Chuck La Tournous of The Mac Observer and RandomMaccess and Omaha Sternberg of iGameRadio.

(Note: There were technical problems with the audio for this session. We’ve done our best to salvage as much as possible.)

Take Control Books is a media sponsor of MacVoicesTV. Get the answers you need now from leading experts.

Christopher Breen has been writing about Apple and its technology since the latter days of the Reagan administration for such publication as MacUser, MacWEEK, and Macworld. Currently a Macworld senior editor he pens the Mac 911 tips and troubleshooting column, hosts the Macworld Podcast, is author of The iPhone Pocket Guide, Sixth Edition (6th Edition)

(Peachpit Press), and offers lynda.com software tutorials on such subjects as OS X Lion, the iPad, and screencasting. When not engaged in journalistic endeavors he’s a professional musician in the San Francisco Bay Area.

Tonya Engst spends her days immersed in Apple technology, serving as editor-in-chief at TidBITS Publishing, which she co-founded. She works behind the scenes on the TidBITS Web site (Apple news for the rest of us) and on the front lines of the Take Control ebook series (highly practical, tightly focused ebooks about technology, mostly Apple-related), where she thinks about the big picture, edits many ebooks, and occasionally gets to write one. Follow her on Twitter.

Omaha Sternberg is the Chief Producer of iGame Radio, covering gaming on the Mac and iOS devices. You can also see her reviews on Mac|Life, Macworld, and iPhone Life magazines. Follow Omaha on Twitter or Google+.

MacVoices #20060: CES – Nextbase Has A Dash Cam For Everyone