In the Mobile App Showcase at Macworld 2011, Jordan Rudess of Dream Theater and the creator of MorphWiz, talks about the move from analog to digital from a music perspective, his inspiration for the app, and how it brings some of the feel back. Starting out as a demo, Jordan takes us over the rainbow with an impromptu performance on MorphWiz on his iPad.

This edition of MacVoicesTV is sponsored by: 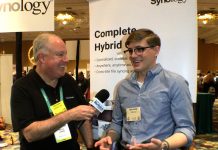