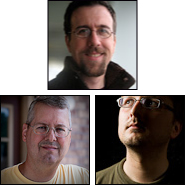 Jeff Carlson is back to discuss his new book, Canon PowerShot G10 / G11: From Snapshots to Great Shots. To make it more interesting, he brought along two of the contributing photographers, Jeff Lynch and Justin Van Leeuwen. The team talk about how the project came together, the decision to publclly solicit photographs, and why so many shooters decided to get involved. The project took on a life of its own, and the conversation covers it all, from the social networking aspects of digital photography to an explanation of what makes this book different than other instructional and coffee table books, to some good old photographer geek talk.

G10/G11 From Snapshots to Great Shots photostream on Flickr