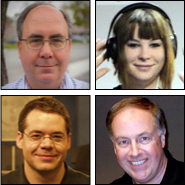 Mark Fuccio, Senior Director for Data Robotics, returns to introduce yet another new Drobo product, and this time he brought friends. Colleen Kelly and Alex Lindsay join in to discuss the new DroboPro FS in particular, and Drobo’s reliability and expandability in general. The DroboPro FS offers redundant gigabit Ethernet connectivity, expandability up to 16TB, and the new Drobo Sync that simplifies backup to a remote DroboPro FS. Colleen and Alex cover what this all means from the video professional’s perspective, and how it compares with other, less elegant and much more expensive solutions. The flavors, characteristics and dangers of RAID enter into the conversation, and are compared with Drobo’s BeyondRAID feature set that solves many of the problems. Things get geeky as the group enter into why the cloud isn’t appropriate for all kinds and volumes of data generated by some projects, and how the DroboFS Pro addresses the needs of those with secure and high capacity storage needs.