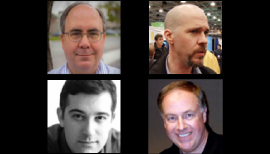 Members of the MacJury assembled virtually from some very different and unique locations under sometimes adverse circumstances to discuss and dissect the (almost) $1.5 billion verdict awarded to Apple in their patent suit against Samsung. Aspects of the verdict covered included the speed of the decision, the fact that Apple was not cited for any infringements, the probability of an appeal, and more. What this decision means for Google, Microsoft and other tablet makers, who the real winners are, and what it means for us are just some of the questions examined by the panel of Mark Fuccio, Ken Ray, Michael T. Rose and host Chuck Joiner.

Since May of 2005, Ken Ray has eaten, slept, and breathed Apple news and news related to Apple news in order to produce a daily Apple news show. and he does just that with Mac OS Ken, with content that includes most stories directly related to Apple, many stories indirectly related to Apple that stand a chance of affecting Apple’s business or its users, and tangentially related stories that are funny.A slightly skewed, sometimes cynical, obsessive look at Apple news, five-days-a-week. Ken also produces an extra day of content in Mac OS Ken: Day 6, a subscription show that features one-on-one interviews with fellow podcasters, industry analysts, experts and whoever Ken wants to talk to. His most recent venture is Mission Log, a Roddenberry Star Trek podcast that explores the Star Trek universe one episode at a time. You can connect with him on Twitter.

Michael T. Rose claims his first Mac (a 128K original) served him well through high school and its successors (a 512KE, SE, SE/30 and IIsi) were loyal stalwarts during editorial jobs at the Carnegie Mellon college newspaper, followed by a 10-year career in editorial technology at Time Inc. titles Entertainment Weekly & LIFE. Since leaving the print publishing world, Mike has helped manage IT and now works as a creative director for MJM Creative Services, an NYC events and face-to-face marketing agency. He has written for The Unofficial Apple Web Log (TUAW) since November 2006. Mike & his family live in Brooklyn, NY. His personal blog is GeekParent, and you can find him on Twitter.