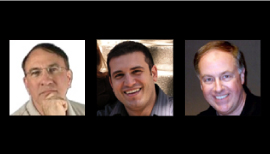 iPhone 5 anticipation is reaching fever pitch, and rumors are rampant. The MacJury attempts to introduce some sanity to the discourse by looking at what its members want to see in the next version of the iPhone, and what the device will need to complete, not just at introduction, but throughout its lifespan. Size, power, camera, hardware and software all figure in the perspectives offered by John Martellaro, Jim Tanous and host Chuck Joiner.

John Martellaro is a senior scientist and author. A former U.S. Air Force officer,he has worked for NASA, White Sands Missile Range, Lockheed Martin Astronautics, the Oak Ridge National Laboratory and Apple Computer. During his five years at Apple, he worked as a Senior Marketing Manager for science and technology, Federal Account Executive, and High Performance Computing Manager. His interests include alpine skiing, SciFi, astronomy, and Perl. John lives in Denver, Colorado. He serves as a Senior Editor at The Mac Observer. You can follow him on Twitter.

Jim M. Tanous is a photographer and technology enthusiast based in Erie, PA. He has professional experience with both Windows- and Mac-based systems and networks. Jim contributes to news, how-tos, and quick tips for The Mac Observer and can be found on Twitter.