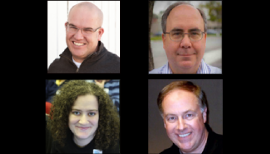 The MacJury waited 24 hours before convening to discuss the announcement of Microsoft’s Surface tablet. Call it a cooling off period. Or a priming-the-pump period. Whatever. This serious-but-fun discussion covers not only the Surface itself, with all of its unanswered questions, but also thoughts on the event itself, and why Microsoft made the choices they did on both. What is the purpose of the Surface, who is it targeted to, and can it compete with the iPad and Android tablets, present and future? What are its strengths and weaknesses? All this and much more are considered by the hanging jury of Weldon Dodd, Mark Fuccio, Kelly Guimont and host Chuck Joiner.

Kelly Guimont is a longtime Apple geek, sitting down (on a telephone book) in front of an Apple IIe in 1983. She can still hear the ticking of the ImageWriter. Thanks to the miracle of the adjustable leg desk, she no longer needs the phonebook. Kelly is one of the regular hosts of the TUAW Talkcast, appearing live from her House of Crackpot theories. She is also an occasional guest host on Angry Mac Bastards, an occasional guest on the International Mac Podcast, and yet still has more to say which she saves for Twitter
.