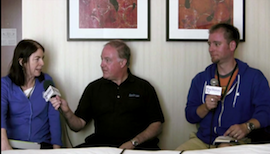 Less than an hour after Tim Cook wrapped up the keynote address for Apple’s Worldwide Developers Conference 2012, The MacJury convened to discuss hardware and software announcements, their picks for the most useful or interesting, and some general discussion on the event. Get the scoop from the panel of Jean MacDonald, Ian Schray and host Chuck Joiner.


Jean MacDonald is a partner and head of Marketing and PR at Smile, developers of PDFpen and TextExpander, as well as an active member of the tech community. A would-be rock ‘n roll star, you can follow all of Jean’s exploits on her Twitter stream.

Ian Schray is a founder of WellRedApps. He has been in the Mac/iOS marketing world since the “dark days” of the late 90s, and worked successfully on dozens of products, a few of which have even won an award or two along the way. He specializes in marketing and planning, and is a regular contributor to a number of podcasts, including Your Mac Life and The MacJury. He has a Political Science degree from University of Oregon, but has never been asked to prove it.