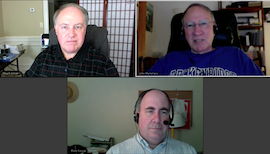 In the last few weeks, the options for cloud storage have exploded, but with minimal diversity. Are some options better than others? Who owns the data you upload to the cloud? How does each service perform? Who do you trust? These and other cloudy issues are pondered and discussed with humor, caution, and maybe a little paranoia. Then, with equal seriousness, the panel talks about some products that don’t exist just yet, but that they would like to see and have. No science fiction here, just some options that developers might want to pay attention to. All this and more is offered by the panel of Mark Fuccio, John Martellaro and host Chuck Joiner.

(Note: There were some fidelity problems as we tested something a little new, so please pardon the lack of our usual audio quality.)

John Martellaro is a senior scientist and author. A former U.S. Air Force officer,he has worked for NASA, White Sands Missile Range, Lockheed Martin Astronautics, the Oak Ridge National Laboratory and Apple Computer. During his five years at Apple, he worked as a Senior Marketing Manager for science and technology, Federal Account Executive, and High Performance Computing Manager. His interests include alpine skiing, SciFi, astronomy, and Perl. John lives in Denver, Colorado. He serves as a Senior Editor at The Mac Observer. You can follow him on Twitter.