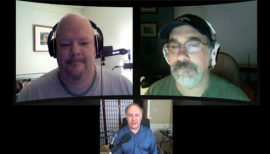 The MacJury convenes to provide some balanced perspective on Apple’s announcement of a stock dividend and buy back planâ€¦and fails. The discussion starts there, then migrated to who gets credit for Apple’s recent successes, Apple’s offshore cash horde, the Apple TV, the entertainment industry, and more. Providing the less-than fair and balanced commentary are Peter Cohen, Steve Sande, and host Chuck Joiner.

Peter Cohen started working with Jim Dalrymple after his site, MacGaming, became part of MacCentral. They worked together at Macworld, where Jim supervised Peter for many years. In his position as Senior Editor, Peter posted and edited daily news on the MacCentral and Macworld.com Web sites. Peter wrote the monthly Game Room column for Macworld magazine and contributed countless other reviews and articles over the years. After leaving Macworld in September, 2009, Peter immediately reunited with Jim as The Loop‘s executive editor. Peter also continues to do a variety of freelance work for online and print publications including Mac|Life, MacFormat, MacUser (UK) and Tap! Peter is also an accomplished podcaster â€“ a co-host and co-founder of Angry Mac Bastards, a weekly podcast that rebuffs some of the more questionable Apple-centric news and analysis posted to the Web. Peter is also frequently featured on other podcasts: he’s appeared on The MacJury, iGame Radio, the Tech Night Owl Live, International Mac Podcast, TUAW Talkcast and many others. (From The Loop)

Steve Sande was born two weeks before the start of the Space Age, and has been a fan of technology since birth. A lifelong resident of Colorado, Steve graduated from the University of Colorado with a Bachelor of Science degree in Civil Engineering (1978) and a Masters Degree in Business Administration (1983). He’s worked in industry and for himself, and prefers the latter. He began writing for TUAW in 2008, and is now the Features Editor for the blog. Steve hosts the weekly TUAW TV Live show, and is a frequent voice on the TUAW Talkcast as well. When he’s not blogging for TUAW, he’s writing books for Apress and Take Control Books. A three-time NaNoWriMo winner, Steve is also involved in a new e-publishing startup. You can follow him on Twitter. (From TUAW)