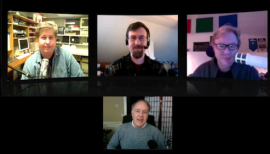 Members of The MacJury convened in a late-night session to review their first weekend’s experiences with the third generation iPad. Entered into evidence are opinions on the new Retina display, the upgraded camera, the battery life, and much more. Buying experiences, the demand for the new iPad, and whether it is time for you to upgrade are all discussed by the panel of Jeff Carlson, Jeff Gamet, Chuck La Tournous and host Chuck Joiner.

Author and photographer Jeff Carlson (@jeffcarlson on Twitter) is a columnist for the Seattle Times, a senior editor for the weekly electronic newsletter TidBITS , and writes for publications such as Macworld and Photoshop Elements Techniques. He is also the author of The iPad 2 Pocket Guide, The iMovie ’11 Project Book, Photoshop Elements 10 for Windows and Mac OS X: Visual QuickStart Guide and the new Meet The iPad (third generation)

. He believes there’s never enough coffee, and does his best to test that theory.