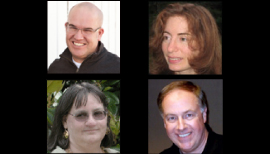 Only hours after Apple make a series of announcements about their push into the textbook market, The MacJury met to examine the impact of such things as changes to the End User Licensing Agreement (EULA) and what it may mean for non-textbook publishers, the text book price ceiling and the focus on high school level books. Is Apple taking a leadership role in moving textbooks to ebooks, or just trying to exert control over part of the ebook space? The evidence is considered by the panel of Weldon Dodd, Tonya Engst, Pat Fauquet and host Chuck Joiner.

Pat Fauquet is a partner at >Dr. Mac Consulting, the author of MacMouseCalls, and part of the Moms Gone Geek team. You can follow her exploits and wisdom on Twitter.