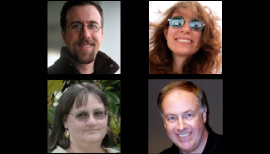 The iPhone 4S didn’t seem to wow the crowd at its announcement, but the sales numbers clearly indicated there was lots to be excited about. The MacJury spent the weekend using their new iPhone 4Ss, and share stories of the shenanigans involved in acquiring the phone, SIM card swapping and surgery, and experiencing puppy love for Siri. Activation issues, favorite features (and no one picked the same one), the ups and downs of Photostream, and more are entered into evidence by the panel of Jeff Carlson, Tonya Engst, Pat Fauquet and host Chuck Joiner.

Author and photographer Jeff Carlson (@jeffcarlson on Twitter) is a columnist for the Seattle Times, a senior editor for the weekly electronic newsletter TidBITS , and writes for publications such as Macworld and Photoshop Elements Techniques. He is also the author of The iPad 2 Pocket Guide, The iMovie ’11 Project Book, and Photoshop Elements 10 for Windows and Mac OS X: Visual QuickStart Guide. He believes there’s never enough coffee, and does his best to test that theory.

Tonya Engst spends her days immersed in Apple technology, serving as editor-in-chief at TidBITS Publishing, which she co-founded. She works behind the scenes on the TidBITS Web site (Apple news for the rest of us) and on the front lines of the Take Control ebook series (highly practical, tightly focused ebooks about technology, mostly Apple-related), where she thinks about the big picture, edits many ebooks, and occasionally gets to write one. Follow her on Twitter.

Pat Fauquet is a partner at Dr. Mac Consulting, the author of MacMouseCalls, and part of the Moms Gone Geek team. You can follow her exploits and wisdom on Twitter.

MacVoices #1190: John Chaffee of BusyMac Discusses the Transition From MobileMe to iCloud for Calendar Syncing